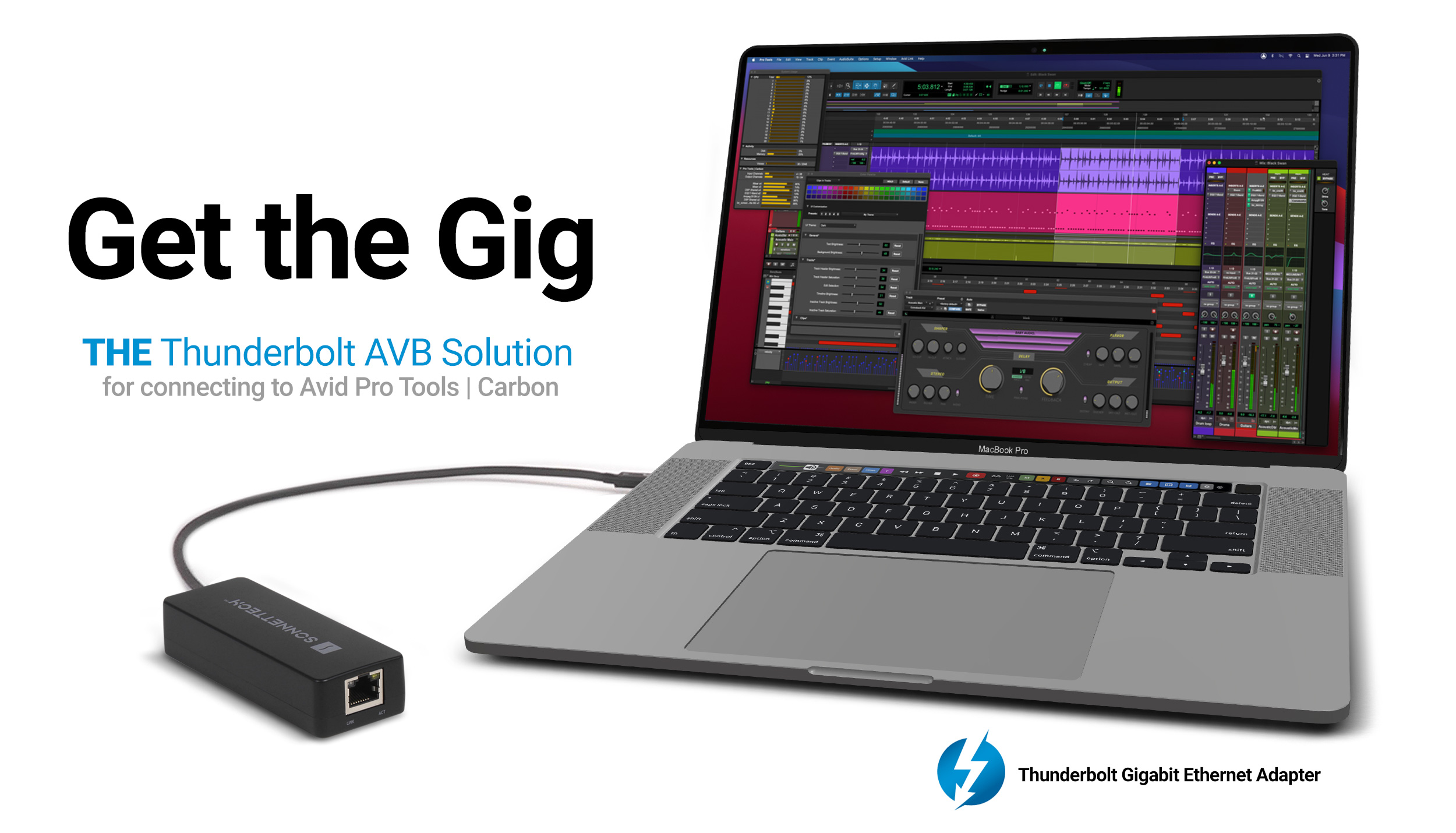 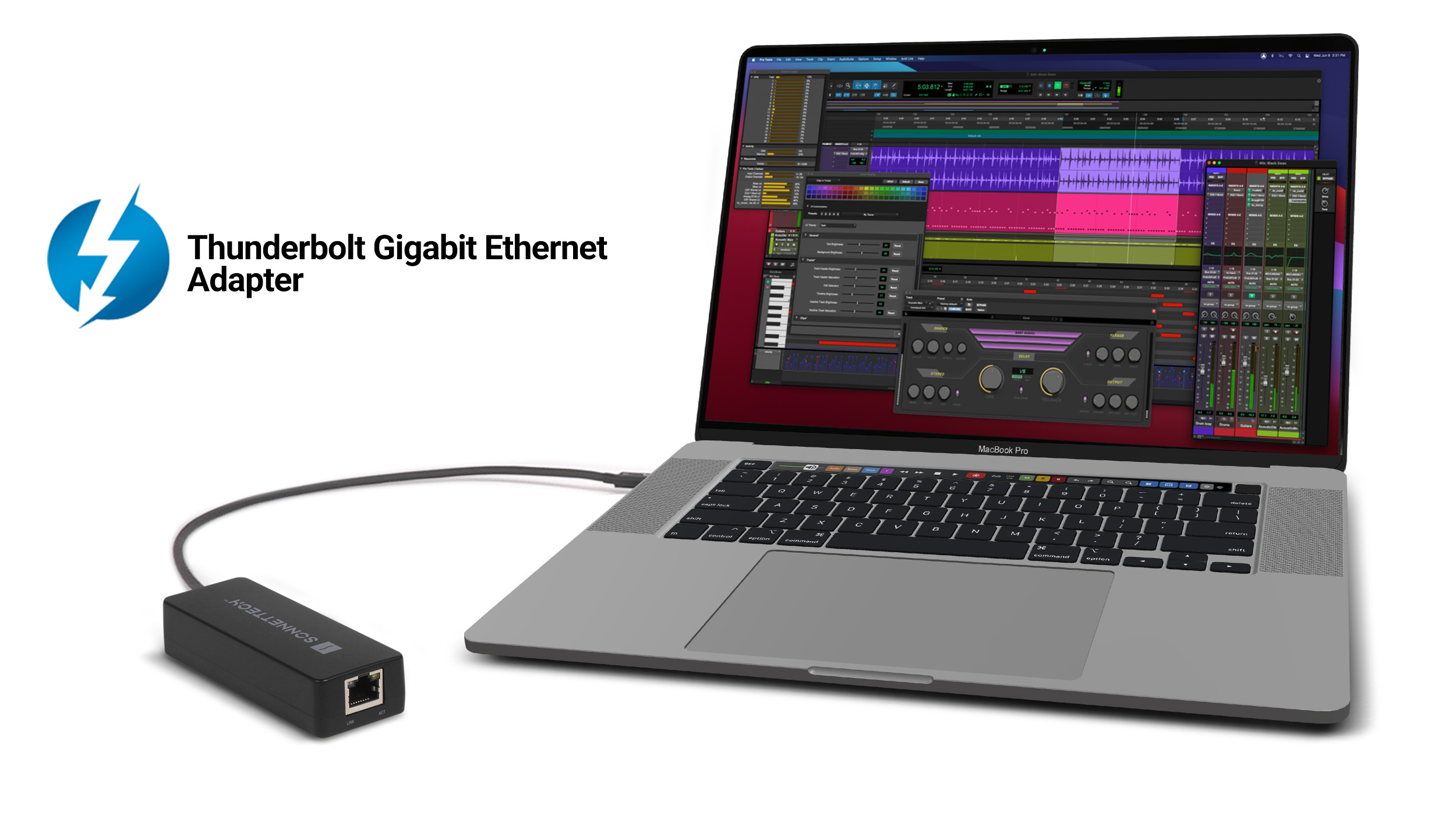 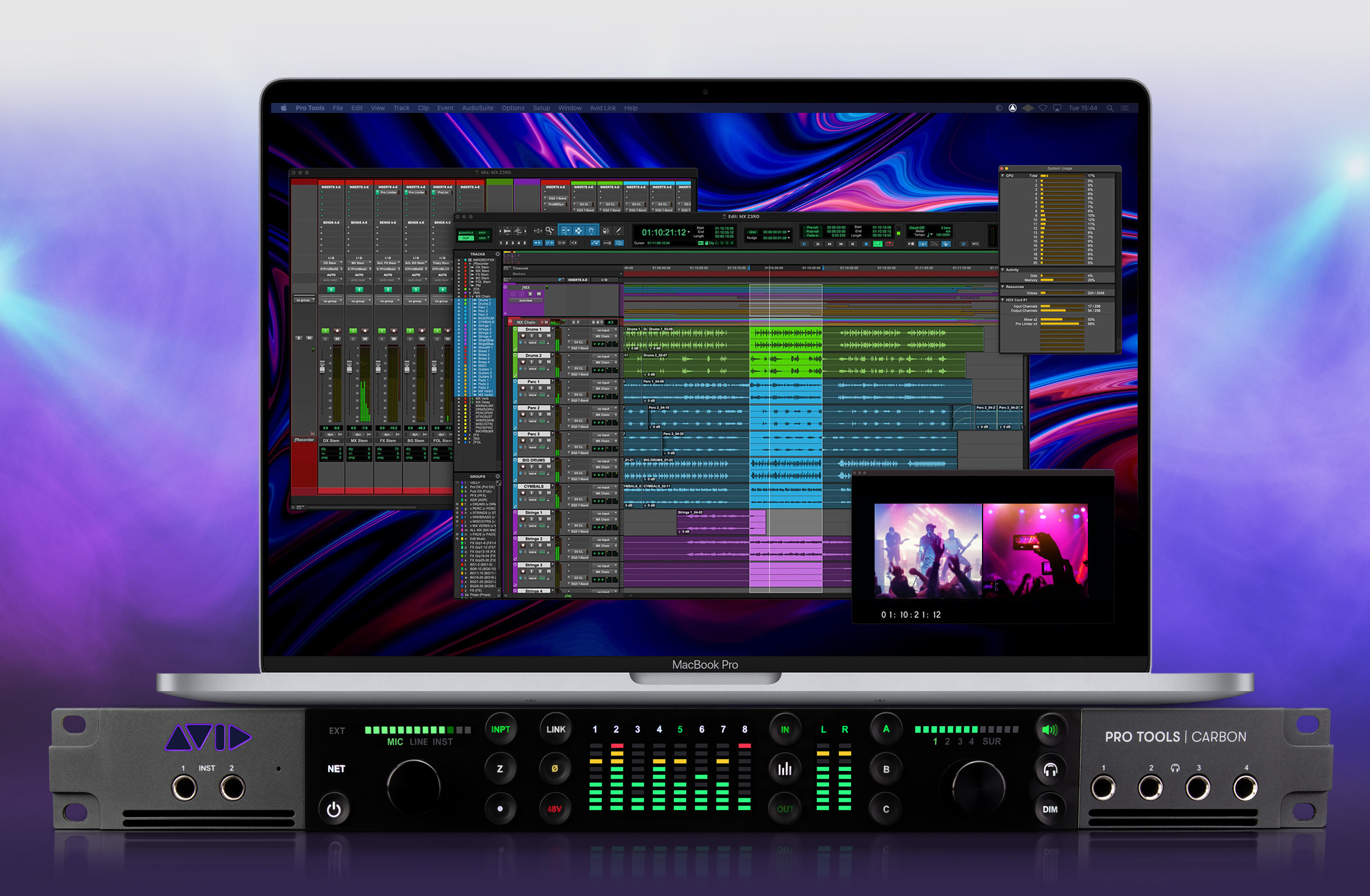 The Single-adapter Solution for Connecting to Pro Tools | Carbon
The Avid® Pro Tools | Carbon audio interface for music production has been described as a creative game changer; its innovative use of eight onboard HDX processors and a custom FPGA enable you to track and monitor with near-zero latency when using AAX DSP plug-ins. Because Carbon connects to your Mac® over Ethernet using a proprietary version of AVB (Audio Video Bridging, aka IEEE 802.1), you’ll have to use an AVB capable Thunderbolt™ Gigabit Ethernet adapter if your computer doesn’t have onboard Ethernet. The Avid Qualified Sonnet Thunderbolt AVB adapter is your single-adapter solution for connecting your supported Mac with Thunderbolt ports to the Carbon interface. 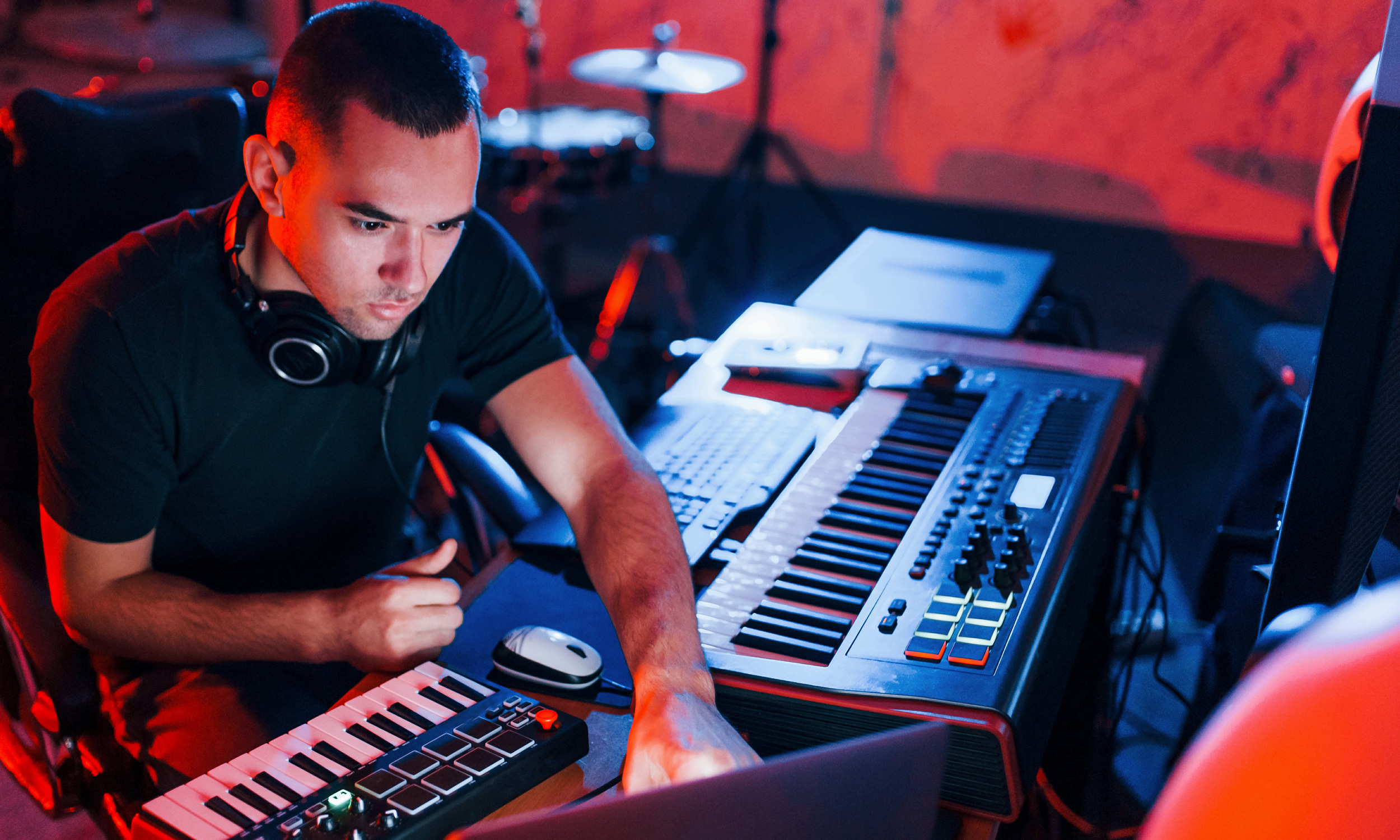 Connect to Other Devices On a Network

Beyond its support for the Pro Tools | Carbon interface, the Sonnet Thunderbolt AVB Adapter enables you to add your Mac as an endpoint in an AVB network and connect to other devices such as audio interfaces, mixers, plug-in processors, personal monitor stations, stage boxes, speakers, speaker processors, and others. Audio Video Bridging support makes the adapter perfect for use in pro audio and video applications where synchronization of data streams is critical.

What is the Benefit of an AVB Network?
An AVB network is extremely reliable since it is designed to reserve a portion of the available Ethernet network bandwidth for its own data. Packets of AVB data are sent regularly in allocated slots within the reserved bandwidth, ensuring AVB packets maintain time synchronization. 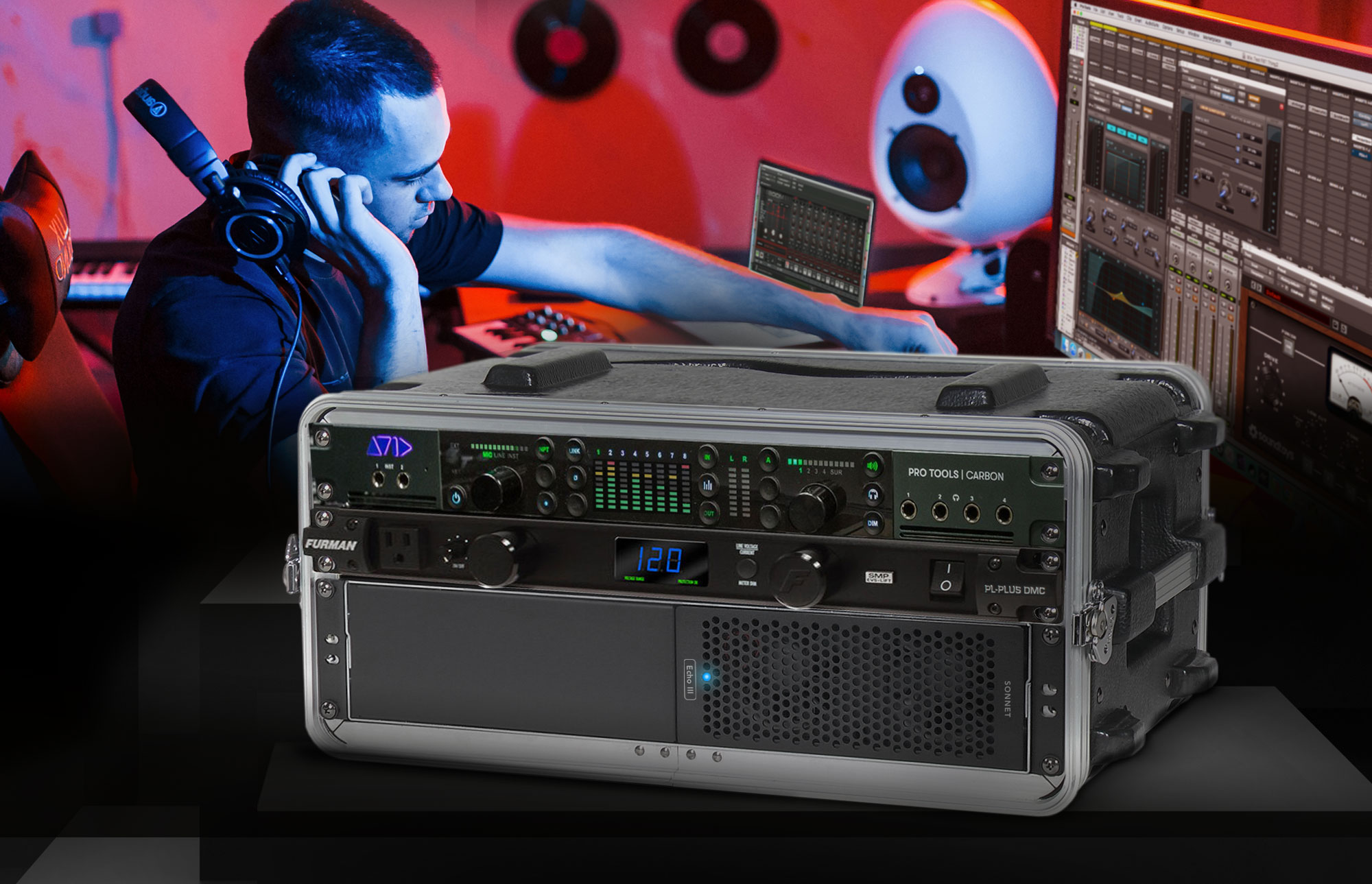 Operating off its Thunderbolt connection, Sonnet’s Thunderbolt AVB Adapter is bus-powered, so there’s no need to plug in a power supply or power cable.

Enables you to make your Mac an endpoint in an AVB Ethernet network. 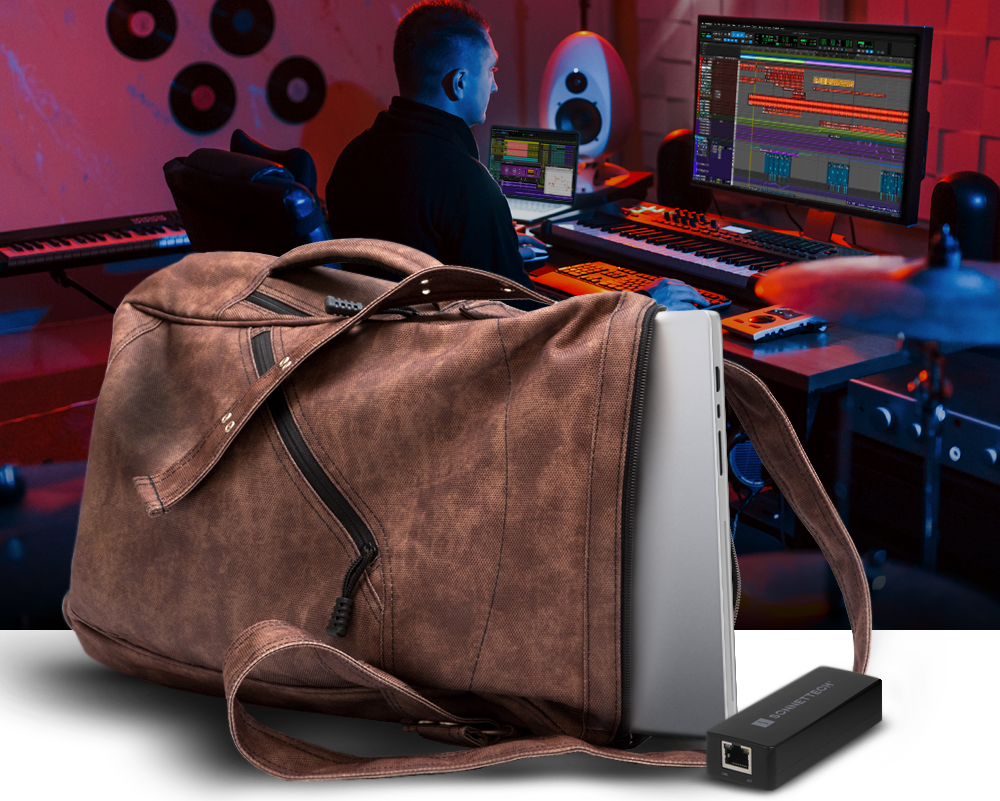 The Sonnet Thunderbolt AVB Adapter measures just 1.5 inches wide by 3.9 inches deep by 0.8 inches tall, small enough to tuck out of sight or fit easily into a pocket in your backpack or equipment bag. Enabling truly portable use, the Sonnet adapter is powered by your computer’s Thunderbolt port, connected through the included Thunderbolt cable. 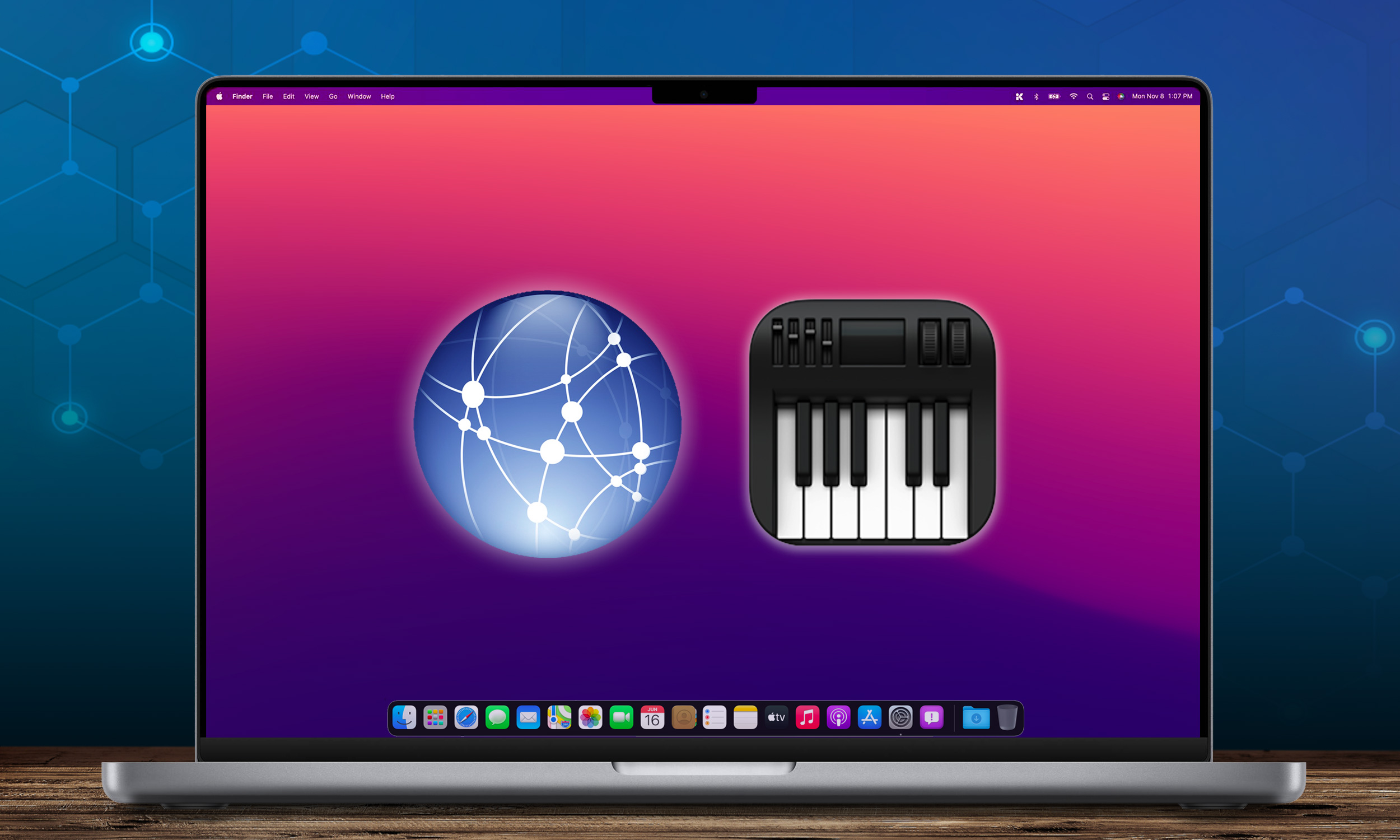 The basic drivers that support the Sonnet Thunderbolt Adapter are included in macOS®. Basic configuration takes place in Network control panel, while configuration for use in AVB applications is handled in the Audio MIDI Setup application and control software.

Sonnet includes a 0.5-meter 40Gbps Thunderbolt cable that is fully compatible with Thunderbolt 4 and Thunderbolt 3 computers. Sonnet also provides a ThunderLok™ 3 Thunderbolt connector retainer clip(1) that prevents accidental cable disconnections—just slide it over one end of the cable, and then plug in the connector and secure it to the adapter by turning a thumbscrew. Because of its unique design, ThunderLok remains on the cable, so it won’t get lost when not in use.