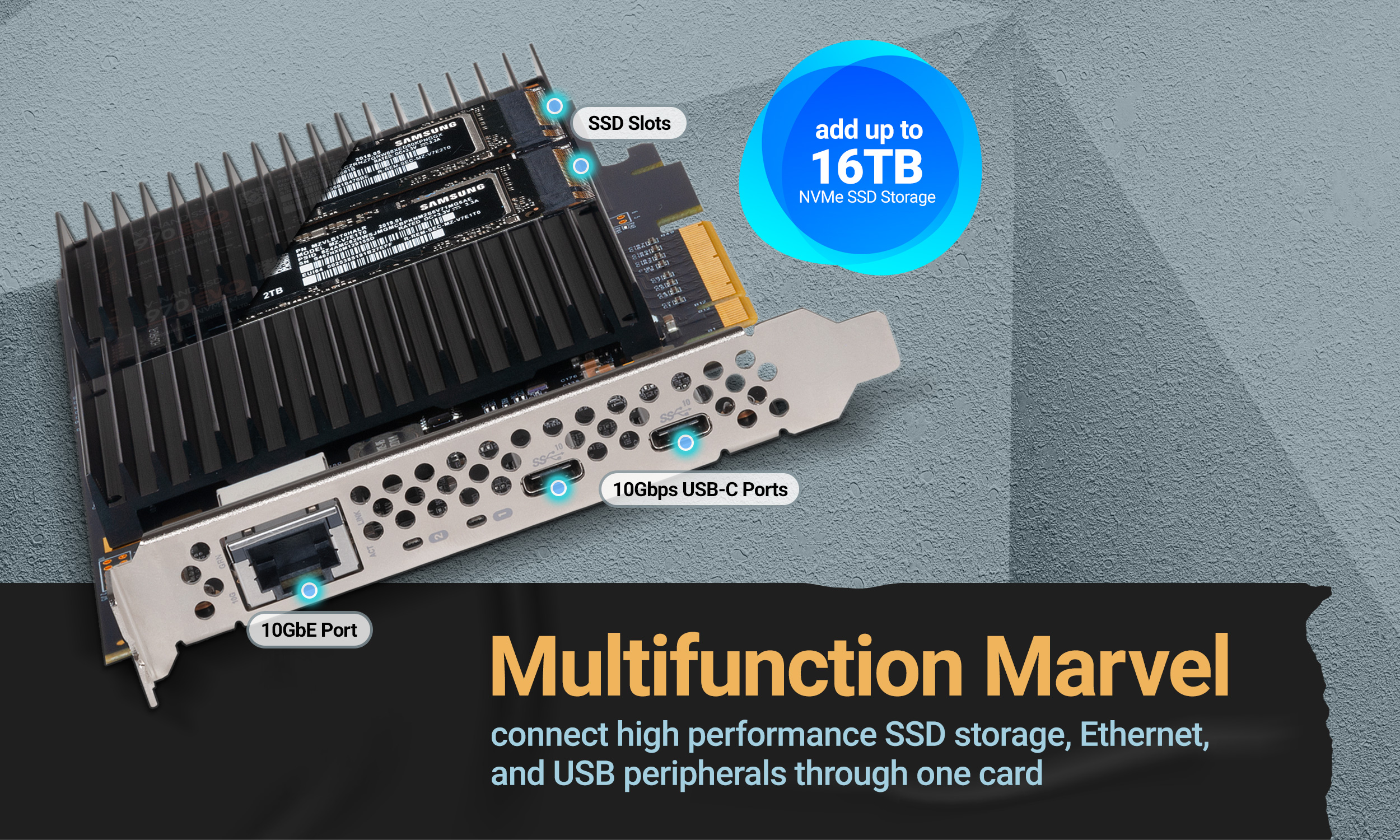 Multiple Functions.
High Performer at Each One.
Only multifunction PCIe adapter card with M.2 NVMe storage, 10Gb Ethernet, and 10Gbps USB-C connectivity
Are you looking to add SSD storage, ultra-high-speed Ethernet connectivity, or high-performance USB-C® ports to your setup? Or all three? Even in computers with multiple expansion card slots, installing three adapter cards to get the interfaces you need may not be feasible. Sonnet’s engineers designed a truly unique solution — the McFiver™ PCIe® Card. Mac, Windows, and Linux compatible, this professional, multifunction adapter includes five interfaces — this is the only adapter card to feature dual M.2 NVMe SSD slots, one RJ45 10Gb Ethernet port, and two 10Gbps USB-C ports, fitting them all on a standard full-height PCIe card.

Two M.2 NVMe Slots
Add up to 16TB of storage with your own high performance M.2 NVMe SSDs 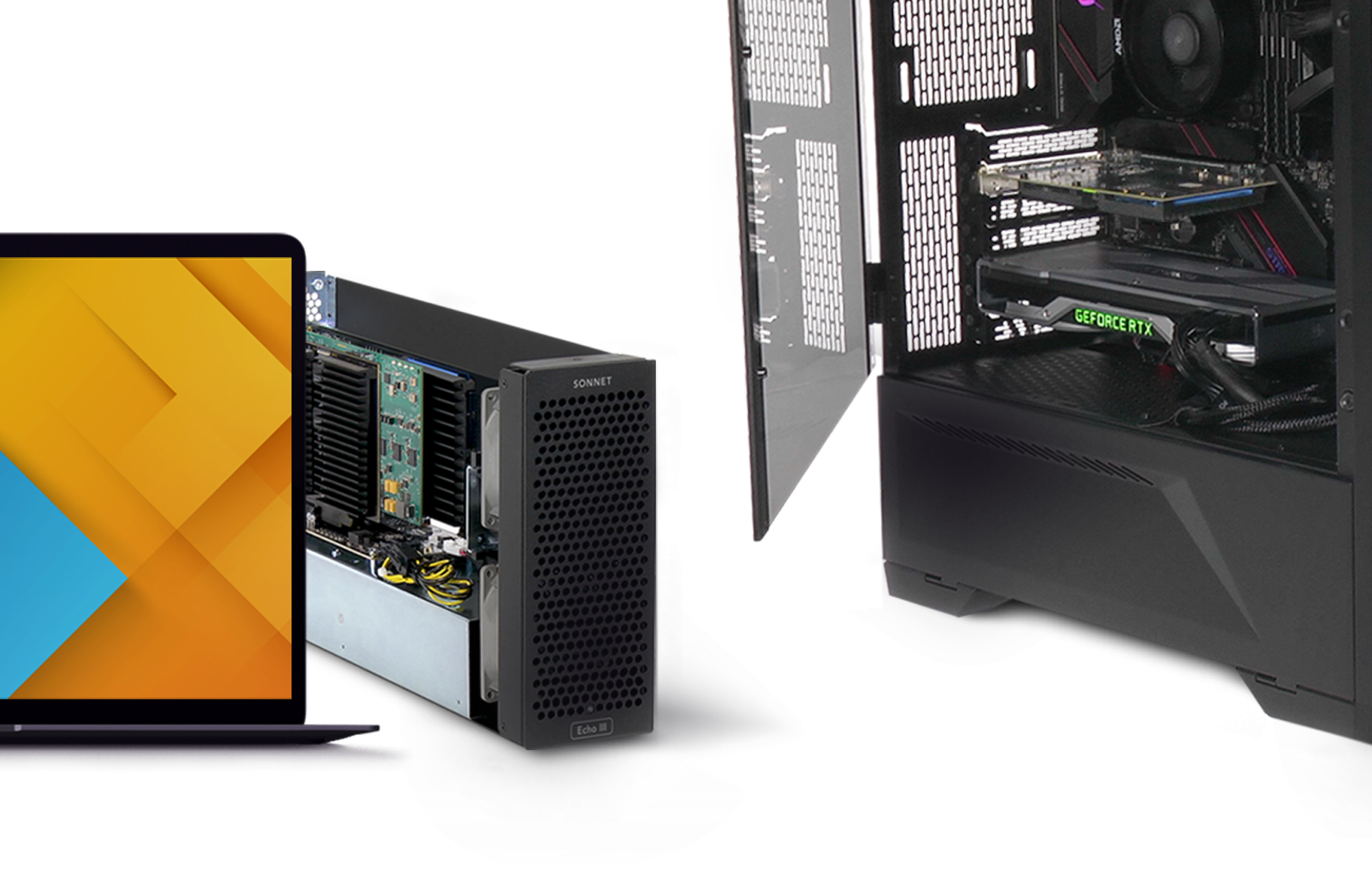 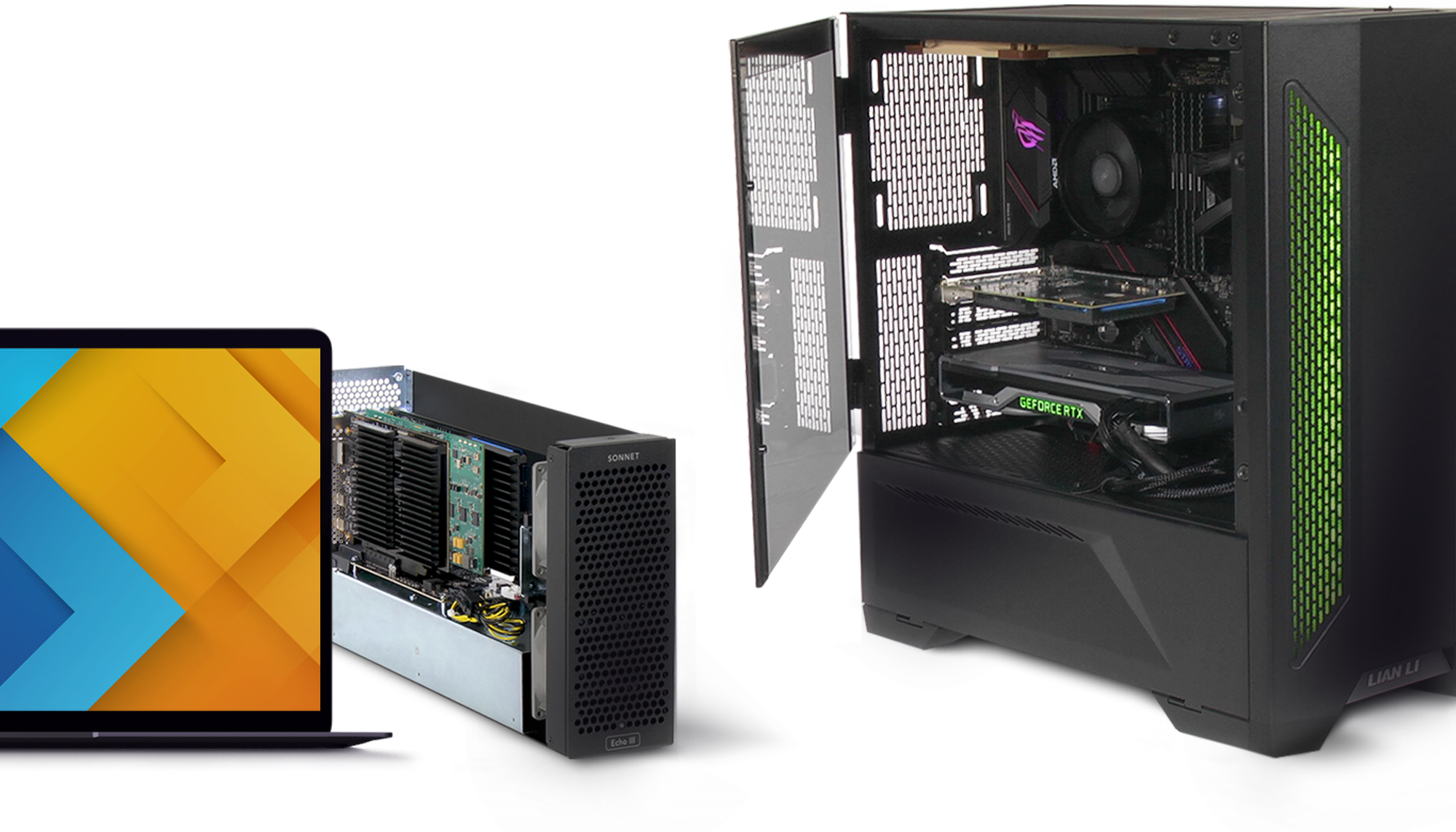 One PCIe x8 Slot is all You Need

Install the McFiver PCIe Card into an available x8 PCIe 3.0 or 4.0 slot to obtain maximum performance in your computer. No PCIe card slots in your computer, but Thunderbolt ports outside? The McFiver provides great performance, a lot of connectivity, and is ideal for use in an Echo™ Thunderbolt™ to PCIe card expansion system with an available full-height x8 card slot. The combo enables you to take advantage or all that the McFiver has to offer with any compatible Mac (M1, M1 Pro, M1 Max, M1 Ultra, Intel®), Windows, or Linux computer with Thunderbolt ports.
McFiver PCIe card shown installed in Echo III Desktop (without outer enclosure) and PC desktop tower; computers and other PCIe cards shown in illustration not included. Add Up to 16TB of SSD Storage

If super high-speed data transfers are critical to your work, you need an NVMe SSD-based upgrade. Installed on the McFiver PCIe Card, a single NVMe PCIe SSD can deliver tremendous performance — up to 3400 MB/s read and write sustained data transfers — but the McFiver enables you to mount two of them. Formatted as a RAID 0 set, two SSDs can achieve sustained transfers up to 6600 MB/s read and write. No matter how you use it, you’ll love the speed.

Internal SSD performance will vary based on the type and number of SSDs used, plus the host computer’s CPU speed.

No Thermal Throttling. No Slowdowns. SSDs heat up significantly when performing very large file transfers and will protect themselves from overheating by “thermal throttling” — a feature that drastically cuts SSDs’ performance while allowing them to cool. The McFiver PCIe Card’s silent SSD cooling solution works to eliminate the need for thermal throttling and enables your SSDs to always maintain their highest performance. 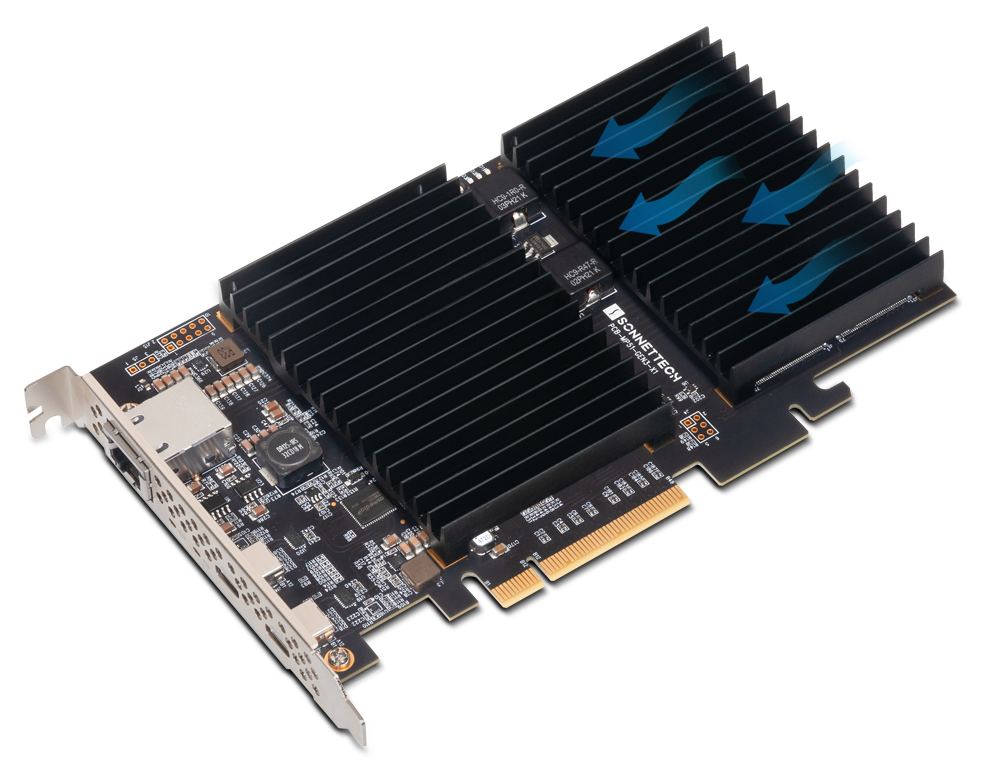 Installing your M.2 SSDs on the McFiver PCIe Card is a simple task, and the card uses your computer’s operating system’s built-in drive utilities to format them. SSD health monitoring is supported through S.M.A.R.T. (Self-Monitoring, Analysis and Reporting Technology) data reporting. Are you a Mac user? You can install macOS® on one SSD to create a very fast boot volume, and then use the other installed SSD for file storage; as a super-fast plug-in, media storage, or scratch disk; or for Time Machine® backups. 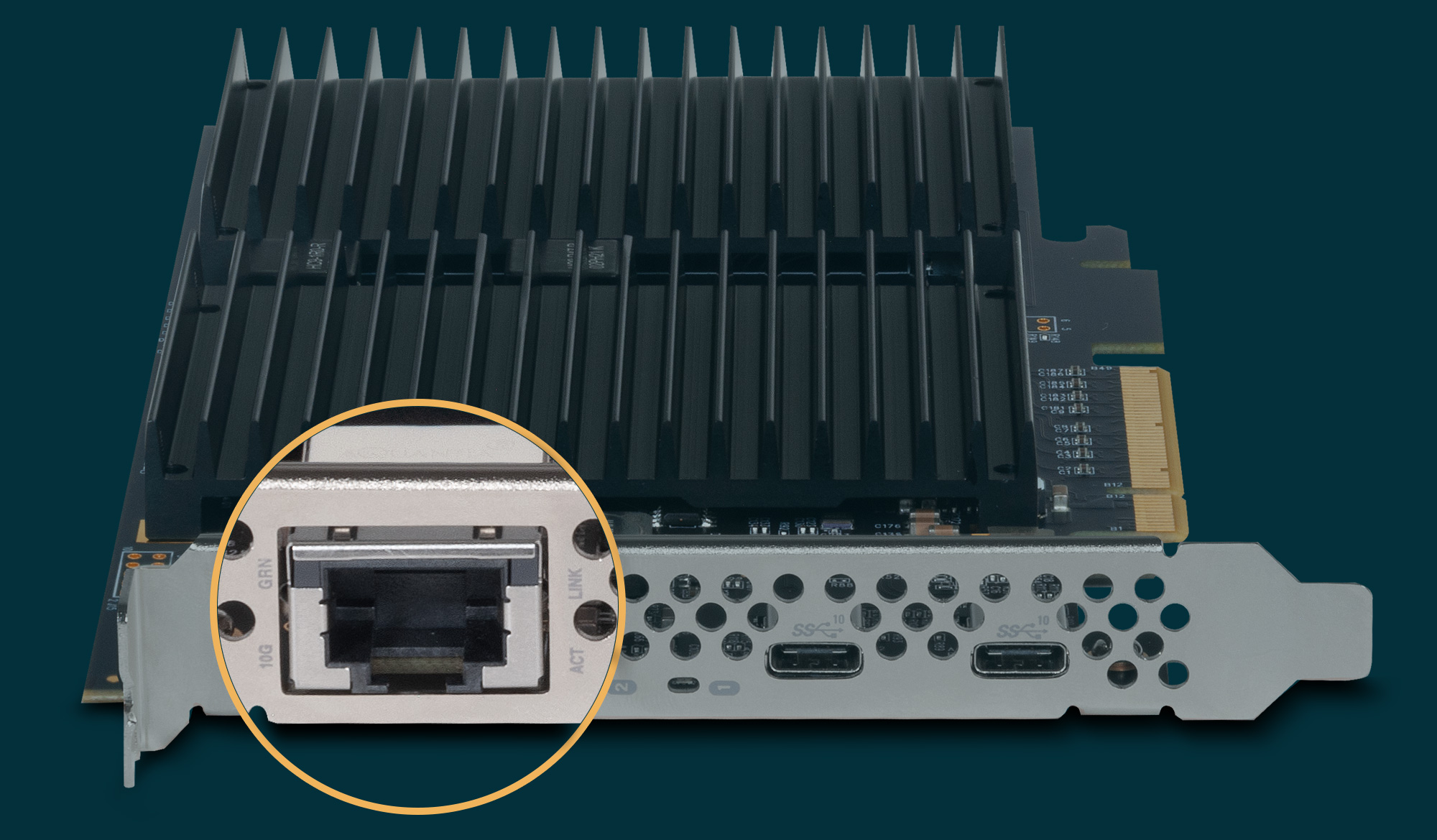 The increasing demand for wired network bandwidth has pushed 10Gb Ethernet (10GbE) into the mainstream. It’s not just for use in software development, postproduction, and shared storage workflows where speed is critical — there’s increasing need for it in workflows of all kinds and businesses of all sizes. Very affordable 10GbE switches have reduced the cost of upgrading, but many computers don’t natively support 10GbE — the McFiver PCIe Card can get you connected. The McFiver is equipped with one RJ45 port that enables you to connect your computer to 10GbE infrastructure via Cat 6A cabling at up to 100 meters.

If your facility already has Cat 5e wiring installed, you can still get an amazing performance gain — from 250 to 500 percent over Gigabit Ethernet speed — without rewiring! The McFiver PCIe Card supports the NBASE-T™ industry-standard (multi-Gigabit Ethernet) of 2.5Gb and 5Gb link speeds to enable greater than Gigabit Ethernet speed over Cat 5e (or better) cabling when used with a multi-Gigabit compatible switch or router. You can utilize the same adapter card across your organization for users supported by different Ethernet cabling infrastructures to obtain the best possible performance.

The McFiver PCIe Card supports Audio Video Bridging (IEEE 802.1Qav, AVB) under macOS. When used with a switch or router (plus infrastructure) with AVB support, the card is perfect for use in pro audio and video applications where synchronization of data streams is critical. 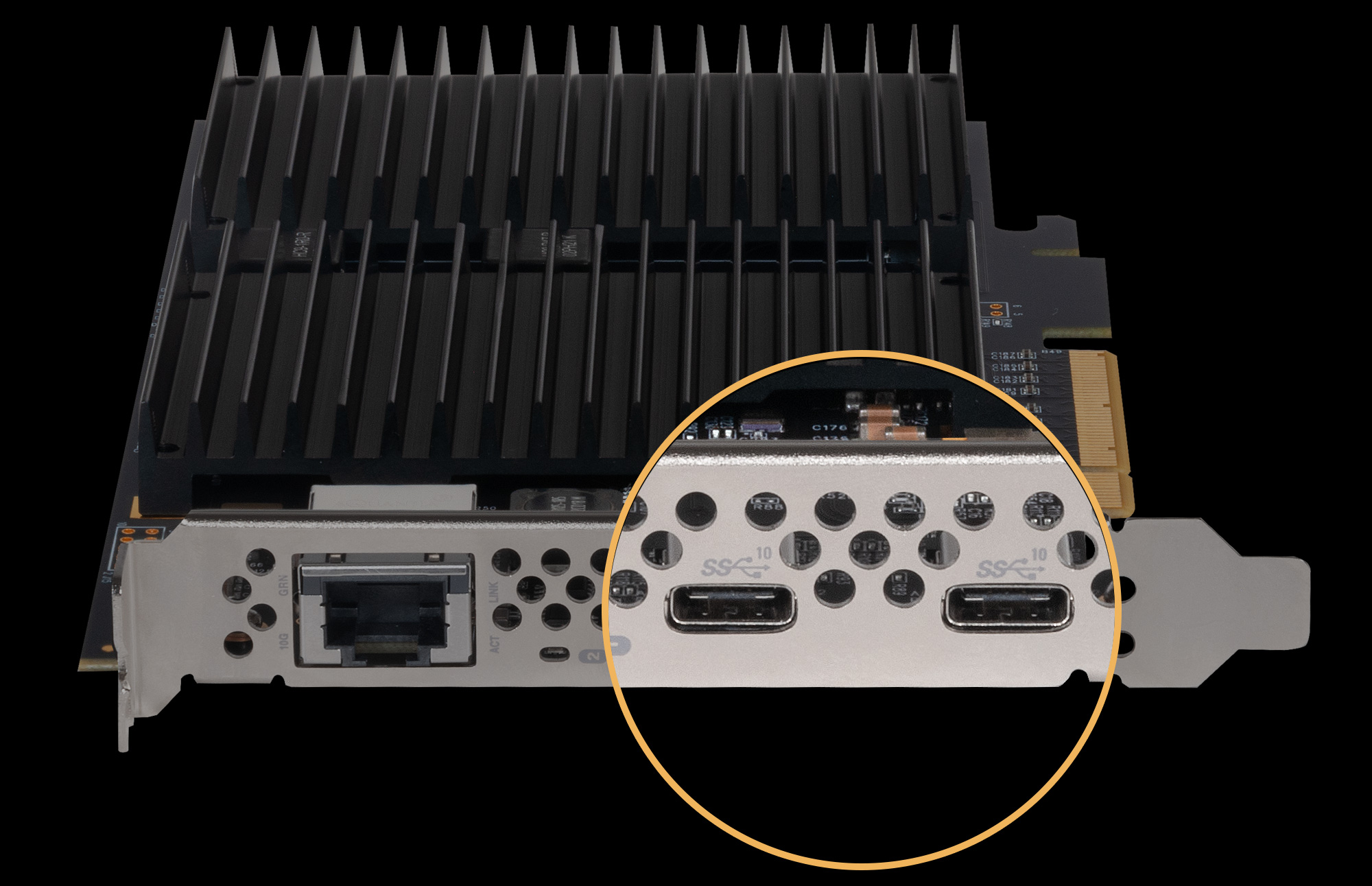 Many multi-port USB cards split their USB controller’s total bandwidth between all their ports, which limits performance when two or more devices are connected and operating. The McFiver PCIe Card features an advanced USB 3.2 Gen 2 controller that delivers full 10Gbps bandwidth per port and implements advanced data traffic management to eliminate bandwidth congestion. When installed in a computer’s PCIe 3.0 or 4.0 slot, the McFiver PCIe Card supports two simultaneous 10Gbps transfers, enabling it to transfer data from two drives to the computer (and from drive to drive) at maximum speeds of 1000 MB/s per drive.

Supports speeds up to 1000 MB/s per drive

The Allegro Pro USB-C 8-Port PCIe Card implements an advanced USB 3.2 feature called “Multiple INs.” When the host computer wants to read from a device — a USB SSD, for instance — it initiates a transaction (called an “IN” transaction), waits for the device to respond with a data packet, and then sends an acknowledge response. Traditionally, the controller must wait for the first device to complete the transaction before making a request of the second device, resulting in bandwidth congestion. The Sonnet card, however, can issue a request to a device, and then proceed to issue a request to another device without waiting for the first device to respond, and so on.

Sonnet Port Power Advantages
Sonnet designed the McFiver PCIe Card with a focus on intelligent power delivery and management for attached SSDs powered through its ports — unlike ordinary USB adapter cards designed without attention to detail.

The McFiver card provide 7.5W of power through each of its USB ports, supporting USB bus-powered SSDs and hubs without the need to connect an additional AC power adapter to the device.

Ordinary USB cards need a separate power connection. Sonnet’s McFiver card draws all the power necessary to operate connected drives from the slot it’s installed in. This enables you to install the Sonnet card in any compatible computer or Thunderbolt expansion system regardless of it having extra power connectors available.

The McFiver card regulates power to each port independently, providing each one protection from power glitches on the adjacent port. Ordinary USB cards can provide poor power regulation, allowing a connected drive to be forced off (auto-disconnected) when an additional drive is connected or disconnected.

Unlike ordinary USB cards, the McFiver card features a resettable fuse on each port that protects both the card and computer should a cable or peripheral fail. Resetting a tripped fuse is simple — just shut down and then restart your computer.

Add up to 16TB of storage inside (SSDs sold separately); four lanes of PCIe 3.0 bandwidth available to each installed SSD achieve data transfer speeds up to 6600 MB/s (SSDs configured as RAID 0 set).

Adds an RJ45 10GbE port to your computer with PCIe slots or Thunderbolt expansion system.

5 Gb/s and 2.5 Gb/s speeds supported over existing Cat 5e (or better) cabling at distances up to 100 meters.

USB 3.2 controller enables each port to support data transfers at up to 1000 MB/s, even while transferring files from two drives concurrently.

Independent port power regulation isolates each one to prevent cross-coupled power glitches that may cause accidental disconnects; resettable device overcurrent fuses protect the card and computer and may be reset by a simple shutdown.

Great for Use in Thunderbolt Expansion Systems 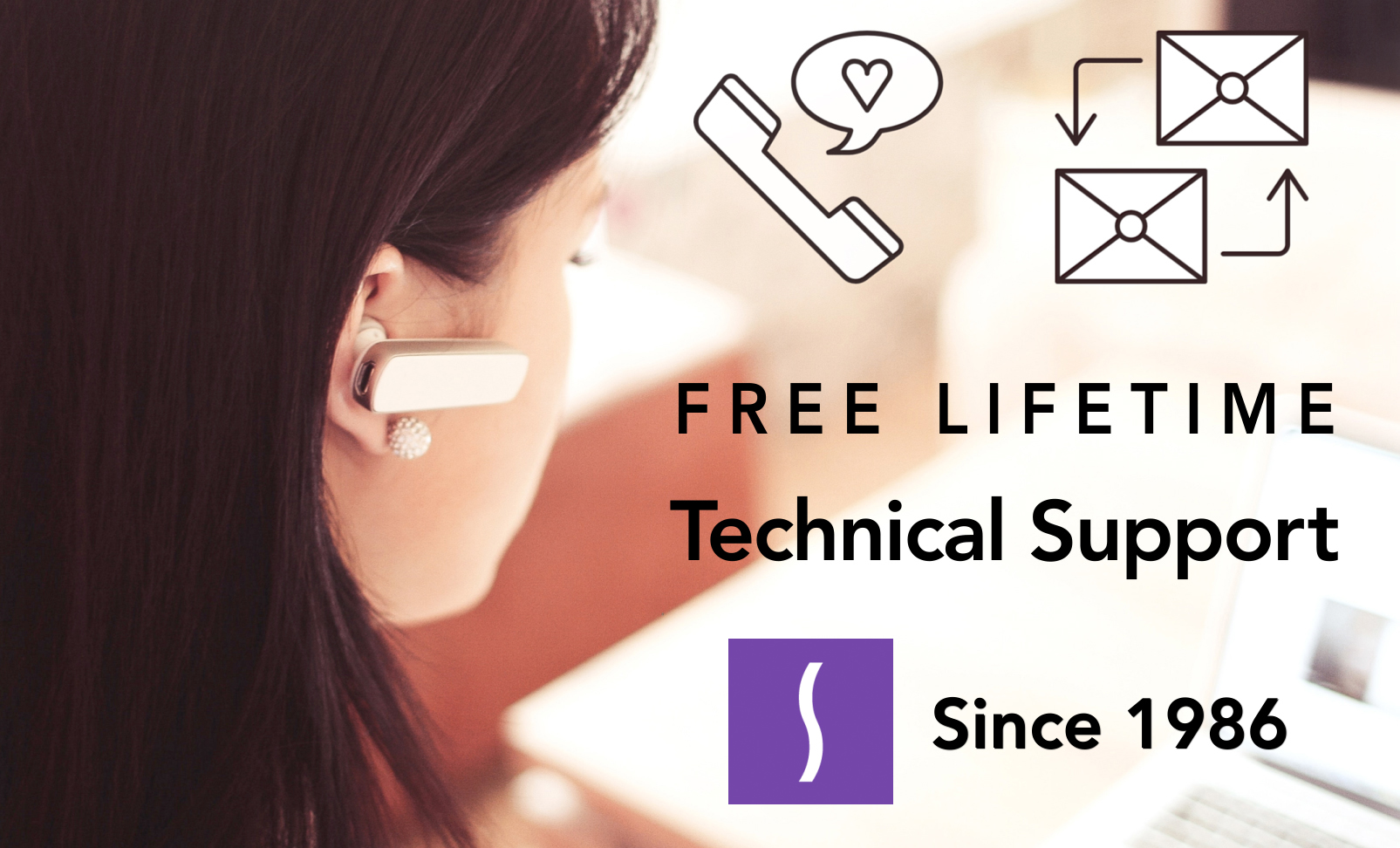